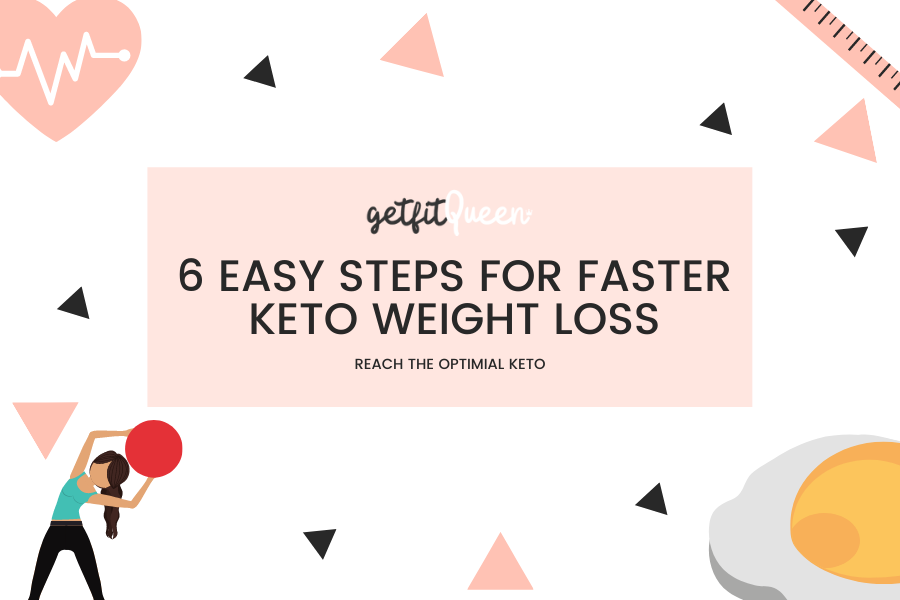 The Ketogenic diet is growing in popularity, with thousands more taking it up every day. If you’re reading this I’m guessing you now know a little about the Keto diet. Heck you may well be on a Keto diet right now! (If you’re not, check out this our keto membership.)

Many people eating a ketogenic diet, as it turns out, may not actually be in full ketosis, and certainly not in a state of optimal ketosis which is great for maximising weight loss on the diet.

Almost all of the benefits that a ketogenic way of eating can provide (mental focus, constant energy levels, weight control) require if you are a of ketone bodies in the blood and a low presence of glucose which is what we’ll be aiming to acheive in this guide.

Yes, you’ve heard this one a hundred times, but many people underestimate how much carbs they’re still consuming when on a ketogenic diet.

The secret is to understand that many foods that seem low carb can still contain enough to push you out of ketosis if you consume too much in one sitting.

For optimal ketosis you wish to be restricting net carbs to 20g or preferably less per day.

At this level every carb counts, so if you are aiming for optimal ketosis it can be worth keeping a detailed food journal for several days to record your food intake. Try using an app like MyFitnessPal to have the macronutrient breakdown of everything you’ve been eating, the results may surprise you to view where carbs sneak in.

You should be taking note of all elements of your meals, that means condiments, spices, seasonings etc as well which is often where carbs slip in. Some key culprits of carb laden foods in disguise are the following, always check the label!:

Snacks in particular are an area where carbs can start to creep back in, especially if you’re overseas and need a quick fix.

A Ketogenic diet is sometimes called a fast mimicking diet, a result of the effects in your body that we are trying to stimulate through our diet. The main advantages of fasting have been well known for quite a while and the entire body of scientific research is growing. Several of the key benefits are seen below:

Intermittent fasting is a technique for getting several of the benefits from a fast, whilst still eating regularly, making this easier to incorporate into most people lives than going for days at a time without food.

A restricted eating window is defined each day, for instance 8 hours at dusk, during which all your calories throughout the day are consumed. The other 16 hours through the day you go without food (hopefully 8 hours of this is spent sleeping!) Some limit their eating window even further, for instance doing a 20 hour/ 4 hour split.

As you become further from your last meal your body goes through many metabolic changes, adapting the body to best make use of what fuel it has for the long term.

During the first days of a fast your body actually uses more energy than normal, it is really an evolutionary tactic to offer more energy to find food. For our ancestors this could be a vital advantage, but we can use this initial window of changes to our body for our advantage when trying to lose weight.

Fasting whilst on a Keto diet should serve to quickly get you into ketosis, and producing higher levels of ketones than usual.

3. Deplete Your Glycogen Through Daily Exercise for Optimal Ketosis

If your idea of exercise is the walk from the couch to the refrigerator, then this one might be for you.

Your muscles can retain lots of glycogen, that will be used for fuel by your muscles first, before recruiting fats. To jump start ketosis or reach a deeper state of ketosis you ought to include some light exercise to burn through these glycogen reserves.

If you’re new to the Ketogenic diet then unwind and go with some long walks, at a moderate intensity, enough to hold a conversation but only just.

An hour’s walk each day bring’s a whole bunch of other benefits, but assistance nudge your body into tapping into fat reserves sooner. For those more fat adapted or who are at the next step of general fitness, then up the intensity of the exercise.

This tactic for depleting glycogen is especially useful after a cheat day, or moment of low will power where you’ve eaten too many carbs. In these situations my priority is to become back into ketosis as soon as possible and burn up all those naughty carbs.

I enjoy combine some brisk walks or light jogging with a prolonged fast to really accelerate the transition back into ketosis. This isn’t something I’d recommend doing straight away without some adaptation, try either exercise or fasting but not the two together if you’re new to the Ketogenic diet.

Excessive protein consumption is amongst the easiest ways to accidentally kick yourself out of ketosis. People can become so obsessed with ‘net carbs ‘and dodging sugars but don’t think about their protein intake.

Why this matters is a process called gluconeogenesis, a mechanism in your body for getting energy from proteins, by essentially converting them into glucose! This can be a common cause for someone not getting into full ketosis, especially if lots of meat and fish is within the diet.

In most cases you’ll want to be aiming for around 20% of your daily calorie intake to be coming from protein.

Aiming for a range between 0.7 and 0.9 grams of protein per pound of muscle should be about right, depending on your activity level. If you’re doing lots of exercise and lifting weights you can go up of this range or a little higher. But if you’re mainly sedentary then adhere to the bottom end (although do re-visit step 3 should this be you!)

If you think you’re not entering ketosis, or losing weight on the keto diet this generally is one of the areas to watch, especially if you aren’t seeing results after properly cutting carb intake.

5. Add MCT Oil to Your Diet

MCT stands for Medium Chain Triglycerides, which are a special type of fatty acid typically found in coconut and palm oil amongst others, in fact coconut oil is a good source.

Whilst you can aquire some MCT oil from coconut oil etc. there are products which are pure MCT. These are tasteless and odourless making them a great addition to smoothies and shakes to boost your fat intake and improve optimal ketosis.

MCT’s are an easily digested and metabolized type of fat, which may be like rocket fuel on a keto diet (especially useful during the transition to a keto diet and avoiding the keto flu!) After consuming mct oils they are very quickly converted in the liver into ketones, boosting your blood ketosis level and supplying the constant level of energy that ketosis established fact for.

If adding MCT to you keto diet, remember that it is a fat and therefore contributes to your daily calorie intake and macros. Some people report stomach discomfort from MCTs so it’s best for starters a small amount before increasing incrementally.

Sometimes we just need a further boost, and that’s where supplementation comes in. The below list is a selection of off the counter supplements together with various culinary ingredients that one could put in more diet to further enhance weight loss and reach optimal ketosis.

The focus of the majority of ingredients it to help control blood sugar, particularly insulin spikes and the glycemic load from consuming carbs. We want our body to be using fats as the primary source of fuel for optimal ketosis, so the following additions to your diet can help prevent carbs coming back into play if you’ve consumed a bit more than the recommended 20g maximum a day.

• Add Fresh Lemon to Your Water

Particularly around meal times. Lemon juice contains citric acid, which can naturally control blood sugar, especially right after eating. Try to add lemon juice to your water, together with over salads and cooked veg, smoothies etc.

This is a type of health ingredients that’s seen touted everywhere, but there’s a good reason for that. The acetic acid found in apple cider vinegar treatment could have a significant impact on the glycemic response from any carbs you eat, reducing the impact on ketosis.

Additionally, the vinegar can contain enzymes which enhance our body’s metabolism of proteins and fats.

Cinnamon can inhibit enzymes which interfere with insulin receptors, and improve insulin receptor activity. It features a host of other health benefits such as having high anti-oxidant levels, anti-inflammatory properties, improves cholesterol markers, anti-diabetic effects.

Try to penetrate 2 tsp of cinnamon a day into your diet. It’s great in shakes and smoothies and many  keto dessert recipes. Also you can sprinkle into coffee (especially bulletproof coffee!)

That’s it, 6 steps to reach optimal ketosis and the ways to know once you’re there. I think give these steps a try and incorporate them into your keto journey. When you’ve got, inform me below of those feelings once you made it to optimal ketosis and whether you have any other tricks you prefer to use to keep burning fat effectively.

Get access to a catalog of meal plans and recipes to ensure that you won’t waste hours struggling to figure out what to eat.Start your keto journey now!

Get access to keto meal plans, recipes, tools and many more resources to start your keto lifestyle.
Start Now
This is default text for notification bar
Learn more